In today’s world atomic clocks are used for many different commercial applications, such as telecommunications, science and technology and cost as much as $500,000. The benefit of accurate atomic clocks is realized everyday when we use our GPS navigation devices in our vehicles.

There are four Atomic clocks in each GPS satellite. These atomic clocks determine how accurate the GPS can locate a destination. The satellites broadcast time signals in a triangular fashion and GPS receivers on the earth can pinpoint their intended location. The accuracy of GPS satellites is normally within 1 meter of its targeted location.

In looking at radio controlled atomic clocks we see that the time source is also an atomic clock, however, the broadcast method in which these clocks receive their time is the reason that so many organisations cannot rely on them for synchronised time in their facilities. 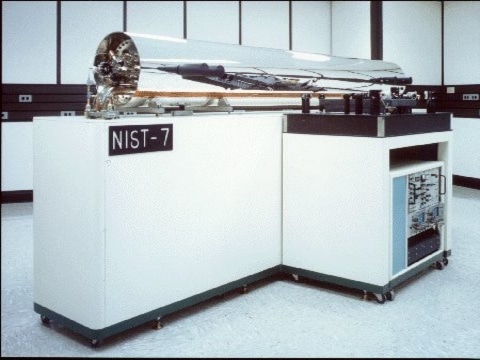 Radio Controlled Atomic Clocks receive their time from an AM radio signal broadcasted by WWVB in Fort Collins, CO. The National Institute of Technology and Standards, (NIST) broadcast the time under the call sign of WWVB. The broadcast  is a powerful broadcast and covers the majority of continental United States. Similarly, in the UK: “The MSF radio signal is a dedicated standard-frequency and time broadcast that provides an accurate and reliable source of UK civil time. It is available 24 hours a day across the whole of the UK and beyond. The signal operates on a frequency of 60 kHz and carries a time and date code that can be received and decoded by a wide range of readily-available radio-controlled clocks.

The MSFsignal is transmitted from Anthorn Radio Station in Cumbria by Babcock International, under contract to NPL. The signal covers the whole of the UK, and can also be received throughout most of northern and western Europe. It is monitored against the national time scale UTC(NPL) and corrected when necessary, ensuring that the transmitted time is always correct.” (NPL).

Synchronised clocks are a necessity for many organisations. Therefore, when WWVB started broadcasting the time many facilities managers were excited. Prior to the broadcast of time on WWVB; hospital, schools and businesses had to install expensive low voltage wired clock systems in order to achieve synchronised timing.

Low voltage wired systems have maintenance costs and it is not easy to add addition clocks or move clocks once the system is installed. Wireless clocks allow you to place a clock anywhere and at anytime.

When the government started broadcasting the time on WWVB many organisations started to install radio controlled atomic clocks. Facility managers saw the opportunity to eliminate the maintenance issues associated with wired clock systems and the ability to easily accommodate additional clock requests.  They were under the assumption that radio controlled atomic could place these clocks any place any time and the clocks would receive their daily time update from WWVB. These organizations were greatly disappointed.

The problem they encounter had to do with the characteristics of the AM radio signal. The AM broadcast from the NIST is capable of traveling great distance; coast to coast and this gave the whole country time coverage. The problem is that an AM signal even though it can travel great distances it is prone to skips certain valley or mountains and  has difficulty penetrating commercial building structures.

Let’s create an example to illustrate the problem. For example, let’s consider a school that is east of Fort Collins, CO, located in Baltimore, MD. The probability is good that the radio controlled atomic clocks placed on the west side of the school building (The side closer to Fort Collins, CO) will be able to pick up the WVBB broadcast. The problem will be that the radio controlled atomic clocks located in the interior of the building and eastern side will have difficulty synchronising to the AM broadcast.

The need for reliable, accurate and synchronised clocks is important in many organisations but probably most important at hospitals and K-12 schools. School clocks in K-12 educational institutions need clocks to make ensure that a teacher can maximize available teaching time. When classes start on time and end on time the foundation for a great educational opportunity exist.

Hospitals have to chart time when a patient enters the hospital. They evaluate symptom based on time intervals. Medical procedures are started and stop based on time. Insurance claims are submitted based on time. Malpractice suits are won by the incorrect recording of time.

Innovation Wireless KRONOsync transmitter is able to synchronised all the clocks in a hospital. Hospitals like Cedars-Sinai Hospital, Good Samaritan Hospital, Aurora Health Care, and Memorial Sloan-Kettering Cancer Center, to name a few, use the KRONOsync transmitter to keep all their clocks displaying the same time all the time.

What makes the Innovation Wireless KRONOsync time clock system work all the time 24/7 in a single building, multiple buildings or on a campus when radio controlled atomic clocks do not synchronize? The answer is that the KRONOsync transmitter operates on a  UHF signal and the transmitter is located at the customer’s site.

With the KRONOsync transmitter on site complete coverage for the facilities is assured. This guarantee gives customers the peace of mind that they can place a clock anywhere in their facilities and the clock will display accurate time and automatically adjust for daylight savings time.

This website uses cookies to improve your experience while you navigate through the website. Out of these cookies, the cookies that are categorized as necessary are stored on your browser as they are essential for the working of basic functionalities of the website. We also use third-party cookies that help us analyze and understand how you use this website. These cookies will be stored in your browser only with your consent. You also have the option to opt-out of these cookies. But opting out of some of these cookies may have an effect on your browsing experience.
Necessary Always Enabled
Necessary cookies are absolutely essential for the website to function properly. This category only includes cookies that ensures basic functionalities and security features of the website. These cookies do not store any personal information.
Non-necessary
Any cookies that may not be particularly necessary for the website to function and is used specifically to collect user personal data via analytics, ads, other embedded contents are termed as non-necessary cookies. It is mandatory to procure user consent prior to running these cookies on your website.
SAVE & ACCEPT